Screening for Chromosomal Abnormalities in Pregnancy

Screening for Chromosomal Abnormalities in Pregnancy

In early pregnancy you will be offered screening for the common chromosomal abnormalities such as Trisomy 21 (Down syndrome), Trisomy 18 (Edwards syndrome) and Trisomy 13 (Patau syndrome). These abnormalities usually occur due to abnormal cell division of the fertilised egg at the time of conception, and are more common as the woman ages.

The risk for giving birth to a baby with Trisomy 21 is about 1:1500 when a woman is 20 years old, and this risk increases to 1:100 by the age of 40. Down syndrome is associated with intellectual and some physical disabilities.  Babies with Trisomy 13 and 18 are associated with more severe intellectual and physical disabilities and are more likely to die during or after pregnancy.

NIPT has revolutionised Down syndrome screening and it is the most accurate screening test available. NIPT can identify more than 99% of pregnancies where the fetus has Down syndrome.

NIPT can screen for an increasing number of genetic conditions.

How is NIPT performed?

A blood sample is taken from the pregnant woman from 9-10 weeks of pregnancy onwards.

In pregnancy, the mother’s blood contains small amounts of the baby’s DNA (fetal DNA).  This is produced and released by the placenta.  The amount increases as the pregnancy progresses. 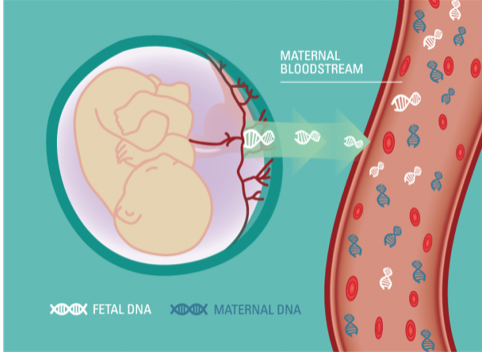 What can NIPT screen for?

As well as screening for Trisomy 21 (Down syndrome), NIPT can also identify pregnancies at an increased risk of  Trisomy 18 (Edward syndrome), Trisomy 13 (Patau syndrome) and sex chromosome conditions such as Turner syndrome (Monosomy X) and Klinefelter syndrome (XXY).

You can also find out the fetal gender, with 99% accuracy (optional).

WUMe provides the Harmony Prenatal Test and the Panorama Test.

NIPT can be performed on single and twin pregnancies and those arising from IVF treatment, egg donation and surrogate pregnancies. NIPT can detect if a twin pregnancy is “identical” or monozygotic, versus “non-identical” (fraternal) or dizygotic.

NIPT can also screen for less common genetic abnormalities caused by deletion of small amounts of genetic material.  These are called microdeletions. Developmental delay issues and structural anomalies are common in microdeletion syndromes.

Which NIPT is performed at WUMe?

There are several trade names for NIPT and it can be confusing which test to have.

22q deletion syndrome is commonly added to this bundle.

What are Microdeletion syndromes?

Unlike Down syndrome, which occurs more frequently in mothers who are 35 and older, microdeletions occur in pregnancies at the same rate for mothers of any age. The severity is determined primarily by the size and location of the deleted piece of genetic material.

NIPT can screen for the following more common microdeletions:

and 21 other conditions across 30 genes.

The future of NIPT

This is rapidly evolving area of science. Eventually, it is likely that analysis of all of the baby’s chromosomes (whole genome fetal studies) will be able to be performed on maternal blood so invasive testing like CVS and Amniocentesis will rarely be required.

Vistara is a non-invasive prenatal test (NIPT) that screens for serious genetic conditions that are not screened for by other standard NIPTs.  Vistara may be used to screen all singleton pregnancies from nine weeks gestation.

Vistara screens cell-free DNA (cfDNA) for new mutations across 30 genes. These mutations can cause severe conditions that affect skeletal, cardiac, and nervous systems, and cannot be detected by standard carrier screening, as these mutations are not present in parents.

Vistara does not screen for chromosomal abnormalities, such as Down syndrome, or test for fetal gender.  However, results from standard NIPT and Vistara together can help reduce the chance for a wider range of genetic abnormalities

What does Vistara screen for?

The incidence of the combined diseases screened by Vistara is higher than that of cystic fibrosis, which is a commonly screened condition with other antenatal bloods.

A maternal blood sample is required.

What is the cost of Vistara Single-Gene NIPT?

Egg donors and surrogates are accepted.

Mother of the pregnancy must be unaffected and not be diagnosed with any of the conditions screened for on Vistara.

Vistara samples are collected on Mondays, Tuesdays and Wednesdays only and sent to the USA for analysis.

The results will be available between 20-24 business days.

When do I have NIPT?

There is an overlap between NIPT and the ultrasound. Most fetuses with Down syndrome will be detected by both tests. However, each test detects some abnormalities that may be missed by the other, and so it is optimal to have both.

What do the results mean?

Both the Harmony and Panorama tests report either a high or low risk.

A “Low Risk” result indicates a significantly reduced chance that your fetus has the chromosome abnormalities which have been tested for. It does not mean that the chromosomes will definitely be normal or that the baby is guaranteed to be healthy. For example, a low-risk result for Trisomy 21 is reported as having a less than 1 in 10,000 chance of having a baby with Down syndrome.

A “High Risk” result indicates that there is a significantly increased likelihood that your fetus has one of the chromosomal abnormalities tested for, but it does not confirm that the fetus has that chromosomal abnormality. For example, a high risk result for Trisomy 21 is reported as having a 99 out of 100 chance of having a baby with Down syndrome.

Confirmation of a high risk result will be invasive prenatal diagnostic testing or by testing the baby after delivery if this is your choice.

What if NIPT fails to give a result?

There is a chance that samples sent for NIPT will not return a result.

In 2-3% of samples, the laboratory is unable to give you a result from the first blood collection. If this happens, you will be asked to provide another blood sample for analysis. A result is successful in 2 out of 3 cases where a second sample is collected.

Usually, a sample does not yield a result due to a low fetal fraction. Fetal fraction is the proportion of cell-free DNA in the pregnant woman’s blood. Cell free DNA is of fetal (placental) origin. Test accuracy and reliability is reduced at low fetal fractions. For this reason results are not issued using Harmony with a fetal fraction of under 4%.

It is important to understand that if NIPT is unable to give a result from your first sample, “back up” screening will be arranged by WUMe. A second blood sample will be taken for NIPT, as well as for MSS (Maternal Serum Screen). The MSS must be taken before 13 weeks and 6 days of pregnancy.

If the second NIPT sample fails to provide a result, CFTS (MSS combined with the 12–13 week ultrasound), will then provide the most accurate screening available.

An alternative screening test for Down syndrome is the Maternal Serum Screen (MSS) combined with a 12-13 week ultrasound.  The ultrasound uses measurement of Nuchal Translucency (NT), a developmental layer of fluid behind the fetal neck which is present from 11 to 14 weeks, together with other ultrasound markers for chromosomal abnormalities.  This is analysed statistically against pregnancy proteins in the pregnant woman’s blood using the Fetal Medicine Foundation algorithm (www.fetalmedicine.com).

This test has a ~90% detection rate for Down syndrome, and has been widely used for many years. It provides an individualised risk for each fetus in multiple pregnancy and also provides a risk for Trisomy 18 and 13. This test is gradually being superseded by the Non Invasive Prenatal Test (NIPT) and ultrasound.

The major advantage of CFTS is that the cost is less than the NIPT test and attracts a Medicare rebate for both the ultrasound and MSS.

A high risk result occurs in approximately 4% of all women screened and if this occurs you will receive counselling about the result and about diagnostic testing (Chorionic Villous Sampling (CVS) or Amniocentesis).  With some results, NIPT may be a suitable next step following a high risk CFTS.

Ultrasound uses measurement of NT between 12-14 weeks of pregnancy, together with other ultrasound markers for chromosomal abnormalities, to calculate a statistical risk for Down syndrome.  This is based on extensive research by the Fetal Medicine Foundation (www.fetalmedicine.com).

All WUMe doctors are accredited by the Fetal Medicine Foundation which requires regular individual audit.

NIPT detection rate for Down syndrome is >99%.

Which test for Down syndrome should I have?

There are 3 test available for Down syndrome:

Deciding whether or not to have NIPT and when

NIPT is a limited screening test, it is not diagnostic.

NIPT is not able to provide a definite result for Down syndrome. It does not assess all the chromosomes as is done with CVS or Amniocentesis.

It is important to remember that even with a low risk result from NIPT, a 12 – 13 week ultrasound is highly recommended, as structural abnormalities and/or increased Nuchal Translucency may be detected which would lead to consideration of further testing.

NIPT is more costly than the older CFTS but does offer a higher detection rate for Down syndrome of >99% versus 90%.

Some women choose to have the combined 12-13 week ultrasound and MSS first and then make a decision about having NIPT. This is called contingency screening and may be a more cost-effective approach for younger mothers.

For women with a high risk CFTS where the Nuchal Translucency and fetal anatomy are normal on ultrasound, NIPT can offer increased screening accuracy and provide the option of avoiding invasive testing with a higher level of reassurance.

For those women who seek definitive diagnosis – invasive testing is the answer.

What are the limitations of NIPT?

Low risk result on NIPT but ultrasound shows a structural abnormality-
If the ultrasound shows a structural (physically visible) abnormality at any stage during the pregnancy, you will likely be offered an invasive test despite having had NIPT. This is because NIPT is for a very limited range of chromosome problems. If the Nuchal Translucency is increased at the 12-13 week ultrasound, you will also likely be offered an invasive test.

No NIPT result –
In 1-4% of cases, the laboratory is unable to give you a result from the first blood collection. If this happens, a repeat blood sampling is successful in 2 out of 3 cases.

Accuracy of Fetal Sex and Sex Chromosome Abnormalities –
Correct assessment of the fetal sex (female or male) is less accurate than Down syndrome screening with NIPT. This is because there are more variations in human sex chromosomes than other chromosomes.

NIPT is also less accurate for Sex Chromosome Abnormalities (SCA) as it is harder to assess the amount of X chromosome against the background of the pregnant woman who has 2 X chromosomes of her own. The SCA include Turner syndrome (Monosomy X) and Klinefelter syndrome (XXY). The detection rate for SCAs is lower than for Trisomy 21, Trisomy 18 or Trisomy 13, however, the exact figure is not known as this would require all newborn babies to be tested.

Additionally NIPT gives a high risk result in some cases where there is no SCA present in the fetus, and this happens more often than it does for Trisomy 21, 18, 13. To clarify this before birth an amniocentesis or CVS would need to be performed. This is why SCA screening is an optional part of NIPT.